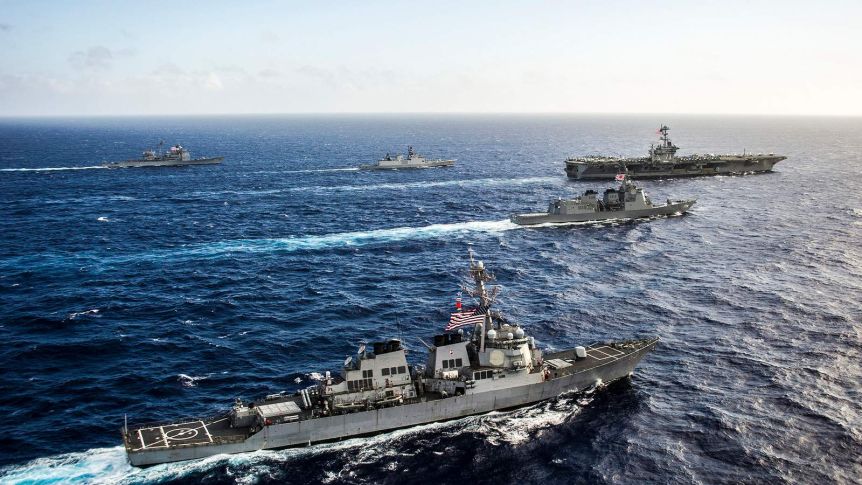 Australia looks almost certain to join key naval exercises with India, the United States and Japan as the four democracies tighten military cooperation to stare down a rising China.

The Australian Government has been pressing to join the Malabar naval exercise for more than five years, but has been repeatedly blocked by India.

But now, several Indian newspapers are reporting that the Modi Government has had a change of heart and will allow Australia to participate.

The Australian Government also believes India has shifted its position, with one senior source saying there were “very positive signs” an invitation will soon be formally issued.

Since 2017, Australia, India, Japan and the US have intensified cooperation through the “Quad” security dialogue, but expanding Malabar to include all four nations would give the grouping a sharper military edge.

It would also represent a substantial diplomatic and strategic victory for Australia.

If Morrison’s defence strategy sounds like war talk, that’s because it is

If there’s a benefit to any anxiety caused by Scott Morrison’s bleak outlook of security in our region, it’s that it will save time.

Both Japan and the US have been enthusiastic about Australia joining the exercise.

But New Delhi has long harboured doubts about Australia’s commitment to defence cooperation, particularly after the Rudd government pulled out of the first iteration of the Quad back in 2008.

India has also been wary of antagonising China, which has criticised the Quad and accused Washington of orchestrating a campaign to contain it.

Australian officials insist the Quad is not aimed at curbing China’s rise but rather about building “patterns of cooperation” and “norms of behaviour” in the region.

But a New-Delhi-based defence analyst, Abhijnan Rej, said it was inevitable Malabar with Australia included would be seen as an attempt to contain China.

“India will never use the ‘C word,” Mr Rej said.

“But in effect, this will be seen as India joining hands towards some kind of an instant containment strategy directed at China.”

“It’s not going to be called part of the Quad. But nobody’s going to be fooled, least of all Beijing.”

The decision comes at a critical moment for Australia.

The Government — mired in a series of acrimonious disputes with China, and increasingly anxious about the US’s commitment to Asia — is working to deepen Australia’s relationship with both India and Japan.

India has the world’s second biggest population but is only Australia’s fifth biggest trading partner. However a dramatic increase in the Indian diaspora in Australia may soon help change that.

Former spokesman for the Indian Navy, Retired Captain DK Sharma, told the ABC that including Australia in Malabar would create a coalition of “like-minded navies, like-minded democracies” across the Indo-Pacific.

He said Chinese assertiveness against individual nations, such as India and Australia, had pushed countries closer together.

“[China] never expected that this kind of alliance can be stitched together,” Captain Sharma said.

“But they have shoved it down our throats … That is what’s rattled them.”

Most observers expect Australia will at first only be invited to join Malabar as an observer, before ramping up its participation and sending naval vessels in coming years.

The coronavirus pandemic might also push back the next Malabar exercise until 2021, delaying Australia’s participation.

India has the world’s third-highest military expenditure and is a dominant force in parts of the Indian ocean, but its capability to influence events in the Pacific limited, according to analyst Mr Rej.

A series of escalating border disputes in the Himalaya mountain range have also hardened views towards China in New Delhi.

Last month, a brawl erupted between troops at a frontier post in the Galwan Valley, leaving 20 Indian soldiers dead. Beijing did not disclose how many casualties it sustained.

Why is India’s move to change the status quo in Jammu and Kashmir “unacceptable” to China?

Jeff Smith from the Heritage Foundation said India had always “preferred to stay non-aligned” but “the constant threat from China has almost forced its hand”.

“India has already forged the type of strategic bonds with the US to the point where they have multiple interoperability agreements, joint vision for the Indo-Pacific, growing number of arms sales, a very high volume and sophistication of military exercises,” he said.

Ian Hall from the Griffith Asia Institute said India’s anxiety about China’s behaviour had “mounted in the past decade”.

“This has led to discussions about closer cooperation with regional partners, including Australia, to maintain freedom of navigation, protect sea lanes, and if necessary, in a crisis, limit the ability of the PLA navy to operate freely in that area.”

A spokesperson for the Australian Department of Defence said Australia had not yet received an invitation to Malabar, but stressed the benefits of the exercise.

“Australia sees value in participating in quadrilateral defence activities in order to increase interoperability and advance our collective interests in a free, open and prosperous Indo-Pacific region,” they said.