The China-India Border Dispute: What to Know 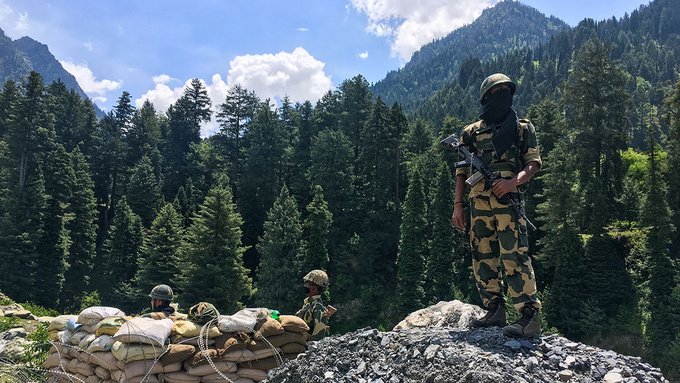 Thousands of Chinese and Indian troops have been in a standoff in the Ladakh region high in the Himalayas since early May. After reaching an agreement to de-escalate on June 6, the mutual withdrawal of troops from the Galwan Valley went dramatically wrong on June 15, with Indian army officials reporting clashes that resulted in twenty deaths. China’s government and media have not provided casualty figures for Chinese troops, but unconfirmed Indian media reports indicated that more than forty died.

Speaking by phone on June 17, both the Chinese and Indian foreign ministers agreed to avoid actions that might escalate the conflict. The same day, Indian Prime Minister Narendra Modi emphasized in a TV address that “India wants peace. But on provocation, India will give a befitting reply.”

Why are Chinese and Indian troops there in the first place?

Both countries’ troops have patrolled this region for decades, as the contested 2,200-mile border [PDF] is a long-standing subject of competing claims and tensions, including a brief war in 1962. The border, or Line of Actual Control, is not demarcated, and China and India have differing ideas of where it should be located, leading to regular border “transgressions.” Often these don’t escalate tensions; a serious border standoff like the current one is less frequent, though this is the fourth since 2013.

The Ladakh region is especially complex, with particularly unusual features. First, there is Aksai Chin, a territory that India has long claimed but China occupies. China began building a road through the area in 1956—linking Tibet to Xinjiang—and has occupied it since 1962. There is also territory that Pakistan ceded to China in 1963. Surveying and mapping the region’s terrain historically proved immensely challenging. A forthcoming history of the Ladakh region points out how colonial-era efforts to survey this area using natural features such as watersheds as focal points did not always align with cartographic needs for precision, and, importantly, ideas of where a country’s territory begins and ends.

Why have tensions escalated now?

There’s no clear reason why tensions have escalated now to their worst in decades—with the first fatalities in forty-five years. And New Delhi and Beijing hold very different views of what happened the night of June 15. India pointed to “premeditated” Chinese action that “reflected an intent to change the facts on the ground in violation of all our agreements to not change the status quo.” China said that “Indian frontline border forces openly broke the consensus reached.”

Explanations circulating in the Indian and international media cover a broad range: China was unhappy with India’s actions in August 2019 to end Jammu and Kashmir’s traditional autonomy, one result of which was the creation of the Union Territory of Ladakh; China saw India’s recent road construction work in the area as a change to the status quo and a challenge to its strategic position; China dislikes India drawing closer to the United States and its allies in Asia; China seeks to distract attention from its part in the global pandemic; and the frank appraisal that India’s growing military imbalance with China, and China’s “political will” to deploy its might under President Xi Jinping, is the real difference.

What are the prospects for a peaceful resolution?

China’s moves are hard to gauge, and as many scholars have noted, India’s options are limited. Modi said in his June 17 address that India’s “sovereignty is supreme,” indicating that accepting a territorial shift in China’s favor likely will not be his next step. But looking for conflict at a time of economic downturn and still-rising coronavirus cases is not a good option, either. New Delhi will likely assess other nonmilitary policy options. The blanket calls to boycott Chinese products have gained some mass appeal in India, but the government may take further steps, such as increasing scrutiny on inbound investment from China, similar to the Committee on Foreign Investment in the United States (CFIUS) review process. India recently announced review procedures for foreign investment from “neighboring” countries, and this net could expand further. China is a source of investment [PDF] in some of India’s top start-ups. And press reports have already identified forthcoming restrictions on Chinese equipment in India’s large and growing telecom sector, including a likely ban on Chinese companies’ involvement in building 5G infrastructure.

Despite long-standing border tensions, the two giants have significant multilateral cooperation, including through alternate global institutions created over the past decade. The BRICS bloc, comprising Brazil, Russia, India, China, and South Africa; the Asian Infrastructure Investment Bank (AIIB), in which India is the second-largest capital contributor; the New Development Bank; and the Shanghai Cooperation Organization, which India recently joined, have all been arenas for cooperation despite the countries’ ongoing security competition. But with escalating security tensions, New Delhi may reexamine its level of interaction in other areas.

Finally, the border clash will likely illustrate for India’s foreign policy planners that its preferred formulation—“the world is one family,” derived from a Sanskrit saying—does not apply to all its bilateral relationships, unless the interpretation of “one family” includes family members working against India’s national interests. From this realization, India may begin to make more choices about its partnerships, recognizing that it isn’t possible to maintain equal ties with all indefinitely.