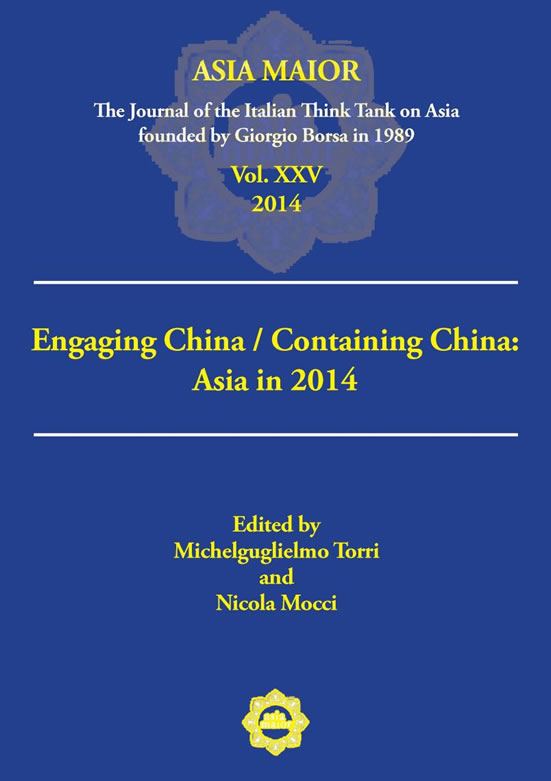 This short foreword is an introduction both to the «Asia Maior» project – namely a project which has been going on for a quarter of century – and to the contents of the present volume, which is the latest – but, hopefully, not the last – offshoot of this project. At the end of November […]

Introduction Differently from the approach used in the previous essays on China in Asia Maior, concerned especially with domestic politics, we have chosen here to privilege some aspects of China-US relations in order to investigate Chinese domestic politics and political economy through such a prism. The reasons for this preference lie mostly in the growing centrality […]

Japan in 2014: Between a China Question and a China Obsession

Introduction Events in 2014 confirmed the centrality of Prime Minister Abe Shinzō in Japan’s political landscape, in line with the expectation of the previous year’s analysis.[2] Following the landmark Cabinet decision allowing the exercise of the right of collective self-defense, much-coveted by the Prime Minister, and the insistence on expansive monetary and fiscal measures under the […]

Malaysia 2014: Reforms and challenges in the year of flight MH370

Introduction In 2014, Malaysian politics were largely determined by the general election of the year before, in which Prime Minister Najib Razak’s governing alliance, the Barisan Nasional (National Front, BN), led by Najib Razak’s party, the United Malay National Organization (UMNO, or United Malays National Organisation), finally achieved a majority. Yet despite its victory, the BN faced some serious […]

Cambodia 2014: The continuation of the Hun Sen-Sam Rainsy political duel and the surge in social conflict

Introduction In late 2013 and early 2014, a lengthy series of working class protests broke out in several Cambodian towns and violent clashes with the police were the order of the day. The most serious episode occurred during the demonstration on January 4, 2014, when four protesters were killed, a countless number injured, and 23 […]

Preface 2014 opened in Bangladesh with the elections, held on 5thJanuary amidst unprecedented political violence which led to the killing of 29 people. The 2014 elections were recorded as the most violent in Bangladesh’s history.[1] Throughout 2014, the government of the re-elected Prime Minister Sheikh Hasina faced several challenges. Firstly, the political crisis, fuelled by […]

India 2014: the annihilation of the congress party and the beginning of the Modi era

Introduction In India, the dominant event in the year 2014 was the 16th general election and its results, namely the resounding victory of the Narendra Modi-led BJP (Bharatiya Janata Party) and the catastrophic defeat of the Indian National Congress (hereafter, the Congress). The Congress, which headed the United Progressive Alliance (UPA), in power during the […]

Introduction In 2014, Nepal was headed towards a resolution of the problems that caused the political and constitutional impasse of 2012 and 2013. The first Constituent Assembly resolved on May 28, 2012, before drafting the new Constitution, to replace the interim Constitution of 2007. This brought the country to a political deadlock. In March 2013, […]

Introduction In 2014 Afghanistan was dominated by the presidential election that led to the victory of Ashraf Ghani, after two successive terms in office by Hamid Karzai. Despite the ultimate success of the transition, the election has been marred by the same problems of fraud and ballot stuffing that characterised the previous polls. The declaration […]

Kyrgyzstan 2014: The painful march towards the Eurasian Union as the lesser evil?

Introduction Since his victorious presidential campaign back in 2011, Almazbek Sharshenovich Atambayev had pledged that Kyrgyzstan’s foreign policy would be markedly pro-Russian, heralding a break with the small Central Asian republic’s post-independence multi-vector foreign policy. While this policy tous azimuts has eventually tired all foreign partners because of Bishkek’s unrelenting efforts at securing greater revenues in exchange […]

Introduction In 2014 Turkmenistan further enhanced its position in the regional political and economic chessboard, developing relations of cooperation with both Central Asian countries and non-regional countries, mainly interested in the Turkmen gas. Ashgabat’s support to the realization of regional infrastructures of transport – such as the Kazakhstan-Turkmenistan-Iran railway – represents the main contribution of […]